Right to attend the meeting

Applications to participate in the meeting

Application to participate in the Annual General Meeting shall conform to one of the following options: by ordinary mail to AVTECH Sweden AB (publ), Lönnvägen 2, 183 43 Åkersberga, Sweden, att: Jonas Saric; by telephone +46 8-544 104 80, by fax +46 8-544 104 89 or by e-mail to info@avtech.aero. In their notification, shareholders should state their name, personal identity number, telephone number and the name of any advisors. If participation is by proxy, the power of attorney and – assuming the issuer of the power of attorney is a legal entity – certified proof of registration, or other document proving the signatory’s authorization, must be sent to the Company prior to the Meeting.

Proposed agenda for the meeting

1. Election of Chairman of the Meeting.

3. Approval of the Agenda.

4. Election of either one or two minutes-checkers.

6. Presentation of the annual report and the auditor’s reports and the consolidated financial statements.

8. Disposition to be made of the company’s profits in accordance with the adopted balance sheet.

9. Adoption of decision regarding the discharge of the members of the Board of Directors and of the President from personal liability.

10. Decision regarding number of Board members.

11. Decision regarding remuneration of the Board and auditing firm.

12. Election of Board, Chairman of the Board, auditors and auditing company.

13. Proposal for authorization of the Board to make decision about a new share issue.

Election of Chairman of the Meeting (bullet 1)

Shareholders representing more than 60% of the votes suggest election of Ingvar Zöögling as the Chairman of the meeting.

Disposition of the company’s profits (bullet 8)

The Board proposes that dividend for the A- and B-shares is not paid.

Shareholders representing more than 60% of the votes suggest the following regarding
bullets 10, 11 and 12:

The Board proposes that the Annual General Meeting authorizes the Board to, on one or more occasions until the next Annual General Meeting, to issue new shares, convertible bonds and / or warrants for cash and to deviate from the shareholders preferential rights. The number of shares issued shall together amount to no more than 4 500 000.

The purpose of the authorization is to enable the Board to raise working capital at merchantable conditions and to enable the issue of shares to industrial partners in the framework of partnerships and alliances. If an issue is made without preferential rights, the price of shares shall connect closely to the price of the company's shares on First North at the time of the issue. Assuming full exercise of the authorization, the newly issued shares will represent about 26 percent of equity.

The accounting documents and audit report for the fiscal year 2012 and the complete decision proposals, including related documents, will be made available by the Company at its address Lönnvägen 2, 183 43 Åkersberga and on the Company website, www.avtech.se no later than three weeks prior to the meeting and will be sent to shareholders as per request. Authorization forms are available on the Company website.

About AVTECH Sweden AB (publ)
AVTECH develops products and services for digital Air Traffic Management (ATM). Its customers include the global aviation industry; e.g. airlines, airports, aviation authorities, technology companies and airline manufacturers. By using AVTECH’s products and services, each individual flight as well as the entire airline operation can be optimized in terms of cost, noise and emission, efficiency, punctuality and safety. The head office is in Stockholm, Sweden with subsidiaries in Toulouse, France and Dubai, U.A.E. AVTECH Sweden AB is listed on NASDAQ OMX First North and has appointed Mangold Fondkommission AB as Certified Adviser. 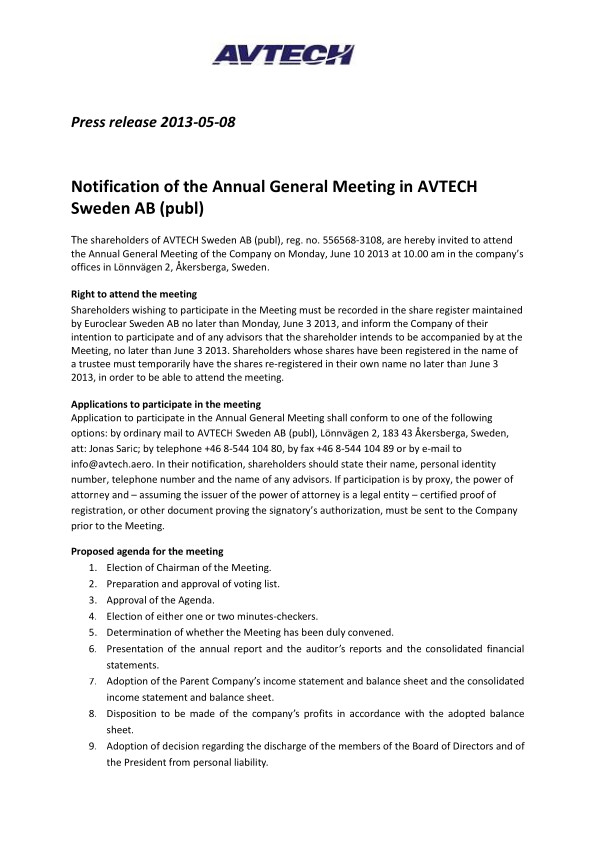