The Board of AVTECH Sweden AB (publ) ("AVTECH") has proposed an Extra General Meeting to, amongst others, take decision on a share issue of preference shares with the preferential right to the current share owners, amounting to approximately 8,5 MSEK (”the preferential share issue”).

In addition the Board proposes the Extra General Meeting to take decision on an option to cover a possible oversubscription in connection to the preferential share issue, that will, if fully utilized, add another 2,0 MSEK to AVTECH (“the Option”).

The company’s current forecast means that AVTECH will reach positive cash flow and result during the third quarter of 2013.

Background and motives in brief

Global air traffic has grown by an average of 5.0 percent per year during the recent decades. Departures and landings are handled on a "first come, first serve”-basis, which means that larger airports can quickly develop bottlenecks due to long lines for takeoffs and landings. Having many aircrafts on hold in the airspace above congested airports is not only annoying for passengers on board, but it also creates serious consequences for the environment as well as costs for airlines. The problem of air traffic congestion on and around Europe's airports is estimated to cost society a total of 1.0 percent of total European GDP per year, which is equivalent to approximately 115 billion EUR per year. The cost of delayed flights is in itself estimated to be in between 1.3 and 1.9 billion EUR per year, and due to the airlines being expected to have about 25 000 aircrafts in service in 2025 in order to meet the increased demand, the current situation is alarming. Each flight is currently about 50 km on average longer than necessary, which results in higher fuel consumption and subsequent increased carbon emissions of around 5 million tonnes annually.

Unlike many other industries, the shift from analog to digital technology has not yet been implemented in the aviation industry. More or less the same technology that was used 50 years ago is still in use to manage air traffic flows. The old systems and methods have previously worked well, but as the global air traffic volumes now have reached the critical limit of what can be managed with the older methods and systems, there is an urgent need to transform and streamline the management of global commercial air traffic.

AVTECH has been in business for more than 20 years developing new technologies for air traffic management and flight planning, and the company has participated in a number of highly profiled projects to test new concepts and to validate the performance of the different solutions. AVTECH is, due to its unique technology and extensive industry know-how, very well positioned to capitalize on the technological paradigm shift that is approaching within the aviation industry. The impending preferential share issue aims to bring AVTECH sufficient working capital to enable the company to fund the final phase of the Company's product development and commercialization, as well as to fund the delays in the business area Professional Services that are previously announced. The objective is to raise about 8.5 MSEK of capital to secure the financing needed to meet the growing demand for AVTECH’s products, and to take the company to the point where it reaches positive cash flow, which is expected in the third quarter of 2013.

The additional capital from the Option, if the preferential share issue is oversubscribed, shall mainly be used to attract additional investors to the company and to increase liquidity in the preference shares issued.

The preference shares issued through the preferential share issue and Option shall be listed at NASDAQ OMX First North or any other applicable market place immediately once the issue has been completed.

If the Extra General Meeting adopts a decision in accordance with the Board’s proposal, and if the preferential share issue is fully subscribed, the company’s share capital will increase with 2 128,21 SEK to 1 279 091,83 SEK.

The preference shares will be eligible for an annual dividend of 48 SEK per preference share, equivalent to an annual return of 12 percent. During the first year, that is, until the AGM that is to be held in 2013, 24 SEK will be distributed.

Below is an indicative timetable for the preferential share issue

October 19, 2012:
Preliminary date for publication of the Information Memorandum connected to the preferential share issue.

November 19, 2012:
Preliminary date for publication of the outcome of the preferential share issue.

Prerequisites for the implementation of the Rights Issue

This press release may not, directly or indirectly, be published or distributed in or into the United States, Australia, Japan, New Zealand, Hong Kong, South Africa or Canada or any other country where such action is wholly or partially subject to legal restrictions. This press release does not constitute an offer to acquire, subscribe for or otherwise trade in securities of AVTECH. The planned preferential share issue is not directed to persons whose participation requires additional prospectuses, registration or other measures required under Swedish law. No securities in AVTECH will be registered under the United States Securities Act of 1933, nor under any similar law in any state in the United States, or the law of another country. This document has not been approved by any authority. This document is not a prospectus and investors should not subscribe for or purchase any securities referred to in this document except on the basis of such information in the issue memorandum including will be posted on the Company's website within the prescribed time.

About AVTECH Sweden AB (publ)
AVTECH develops products and services for digital Air Traffic Management (ATM). Its customers include the global aviation industry; e.g. airlines, airports, aviation authorities, technology companies and airline manufacturers. By using AVTECH’s products and services, each individual flight as well as the entire airline operation can be optimized in terms of cost, noise and emission, efficiency, punctuality and safety. The head office is in Stockholm, Sweden with subsidiaries in Toulouse, France and Dubai, U.A.E. AVTECH Sweden AB is listed on NASDAQ OMX First North and has appointed Thenberg & Kinde Fondkommission AB as Certified Adviser. 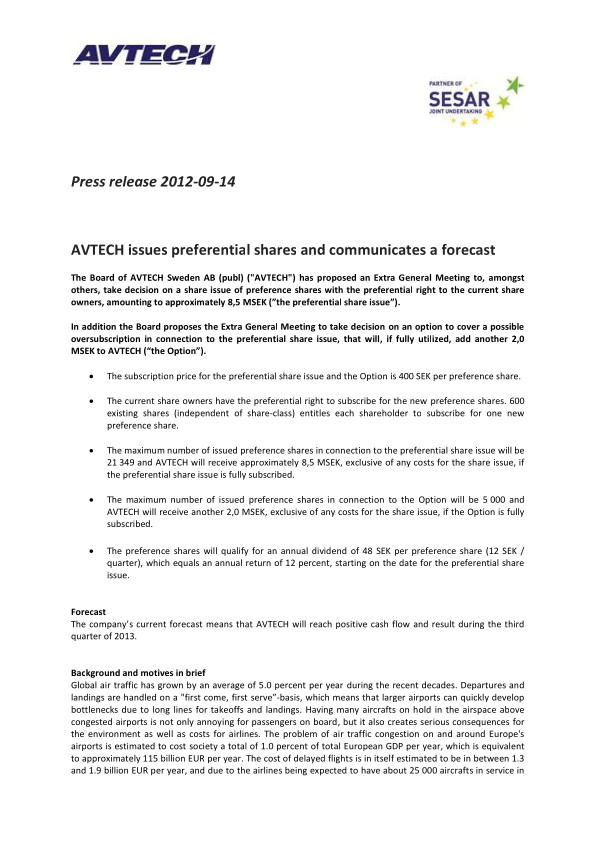